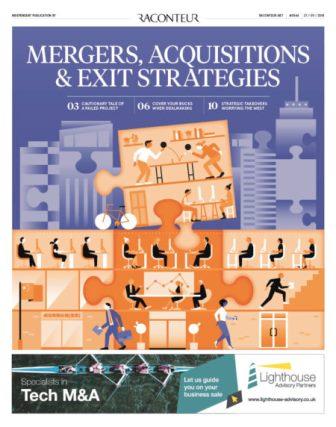 The Times has today released its Mergers, Acquisitions & Exit Strategies Raconteur 2018 report and has featured quotes and insights from the Arrowpoint Advisory team.

In a review on how to avoid culture clash in mergers and acquisitions, Daniel Domberger, provided his thoughts on how culture is an important factor in doing a successful deal. Daniel believes cultural fit should be a crucial consideration of any transaction, as well as the usual financial and legal due diligence.

"Culture is consistently a very important factor in doing a deal and making it successful because people are people, and culture is simply an expression of those people within an organisation," he says. "It's often viewed as 'putting beanbags in the office', but there's a clear distinction between perks and culture, which is more about how people interact and get on."

In an investigation on how to deal with merger or takeover talks with a direct competitors,Arrwopoint Advisory's Managing Director Jeremy Furniss provided insight on how to prepare for an unforeseen and incomplete end to a merger and acquisition. "Make sure the NDA signed gives you adequate protection." Jeremy also explains how virtual data rooms, or VDRs, have revolutionised the way in which information is shared between bidders, giving a company more control over where is information is shared.

Check out Jeremy's full piece in The Times Raconteur here.